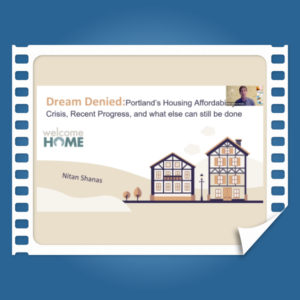 [Video] Dream Denied: Portland’s Housing Affordability Crisis, Recent Progress, and What Else Can Still Be Done

“Dream Denied: Portland’s Housing Affordability Crisis, Recent Progress, and What Else Can Still Be Done” was presented by Bill Emerson Hunger Fellow Nitan Shanas as part of the briefing “A Snapshot of Hunger in America” on February 17, 2022. Nitan was placed with Welcome Home Coalition in Portland, Oregon, from September, 2021 to February, 2022.

Born in Israel, Nitan moved at the age of 10 with his family to Cherry Hill, New Jersey. Nitan graduated summa cum laude from Rutgers University - Camden with majors in Psychology, Urban Studies, and Economics and a minor in Ethics. As a Bonner Foundation scholar, he has worked at a local homeless shelter and advocated on behalf of the city of Camden’s homeless population through various awareness campaigns including Rutgers Camden’s annual Hunger and Homelessness Week as well as his most recent initiative - the Rutgers Sleepout for Homelessness Awareness - which raised funds for a local homeless shelter. In his senior year, Nitan served as the student body president for Rutgers Camden as well as an intern at the National Homelessness Law Center before becoming an Emerson fellow.