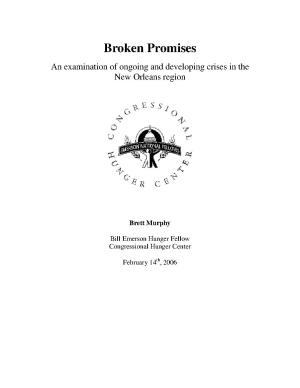 Broken Promises incorporates interviews with individuals and families affected by Hurricane Katrina into an analysis of ongoing and emerging crises in the New Orleans region.  The report offers a simple overview of the New Orleans area housing crisis, highlighting the lack of “affordable” housing; explores the difficulties faced by workers who have come to the city to help rebuild; and discusses how and why thousands of indigent defendants in the Orleans Parish Criminal Court system have been denied their constitutional rights to representation, due process, and a speedy trial.

Brett, originally from Oklahoma, graduated from Rice University in 2004 with a degree in history.  In college, he helped devise and implement a field study on the political socialization of young women; conducted research used in multiple books and articles on women in government; served as the captain of the Rice mock trial team, winning two state championships and one national championship in debate; and studied gentrification in Houston's Fourth Ward.