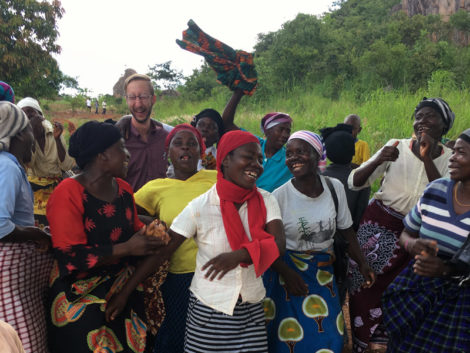 The last we heard from Tanner Roark he was working with Project Concern International on an evaluation of the Njira Project, a resilience-building initiative in southern Malawi. Now he’s based at their Washington, D.C. offices, continuing work on resilience and agriculture, as well as developing a road map for policy engagement and an analysis of Malawi’s local governance system. We asked Tanner about what he’s learned about leadership and effective foreign assistance from his time as a Leland Fellow—read on for his perspectives on power, leadership, and the role of land grant universities and farmers in ending hunger.

“I want to be a leader wherever I’m at, but not necessarily the person who’s calling the shots.”

Leland Fellows Tanner Roark (rear, with glasses) with community members in Malawi during his field placement.

What would you say you’ve learned about leadership, or what it means to be a leader, in this work that you do?

I think I’ve recognized that leaders are not always the ones that are standing at the front of the room. That’s our typical view: the person that’s in charge is the leader. But a lot of times, leaders are people that are working behind the scenes, the ones that are humble and hard working. There are leaders at every level. I’ve seen leadership in our office here: these are people offering encouragement over lunch, in the kitchen, or in the field. People walking through a flooded village are leaders.

I have learned that leaders are people that make those around themselves better at doing what they do, and make them feel valued, and make them feel loved, ultimately. So much of leadership comes down to how you interact with other people: you can have great vision, you can have great strategic direction, or know how to fill in a log frame or whatever, but if you’re not connecting with people and understanding them on a very human level, then all of your efforts are moot.

Some of the leaders from my field time that really stick out to me are people that I don’t even speak the same language as. They’re in the community, holding up maps, saying, “these are areas that we need, as a community, to improve.” Or, “we need to build trenches here, otherwise we’re going to flood.” Then, you have some at the national level, whose policy enables these things to happen. Both are important, and there’s lots of little leaders everywhere. I want to be a leader wherever I’m at, but not necessarily the person who’s calling the shots.

The idea of accountability and ownership is definitely crucial at every level, whether it’s at a village level, or district, even to the national level. If there’s a breakdown in one of those areas, it’s a breakdown in the whole process.

I could see these principles play out in Malawi, even as we speak. The government of Malawi has developed a national resilience strategy to reduce food insecurity, and the NGOs are trying to figure out how they can support the government in doing that—not doing it themselves, but supporting the government in implementing their own strategies, and figuring out how it can work sustainably after NGOs are out of the picture. I think this is a good sign of commitment and political will by the government, to be able to own their own process and develop it. That’s for the positive part.

In ways that I’ve seen it done partially—I think accountability is hard in all senses, and no one likes to be held accountable for something they’re not living up to. I think accountability is especially hard for countries that are lacking in financial and human resources. You might have all sorts of demand from lower levels, trying to hold you accountable, but if you’re lacking in financial and human resources, it’s hard to supply that demand.

The challenges in general, they’re complex, and it’s good to have these principles of accountability and ownership, but at the end of the day, the principles only matter as much as you’re able to implement them.

“The country is made up of people.”

Tanner presents his findings from Malawi to his fellow Leland Fellows in September 2018.

Now that you’re working in a headquarters environment, do you see these principles in effect in different ways than when you were in the field office?

I think what’s hard, looking at it from D.C., is saying, “how do we create a policy using these principles in a way that covers everything?” That loses a lot of its nuance when you get down to country level. The further in you get, the further it becomes separated from these policies that we’re trying to make here. In our office we’re talking about strategic directives not connected with any country, like how do we adapt our model to eventually work ourselves out of a job? But when you’re in the field, you are not talking at such a high-level. You’re working in the day-to-day. You’re not talking about the different metrics for measuring; you’re looking at, “what do we need to make this community more resilient to a flood this year?” Sometimes, it’s like, is this still a commitment capacity? Accountability, country ownership, or is it community ownership? I think it’s a good framework. It just becomes more muddled once you get into the weeds of it.

So if there’s a disconnect between the immediacy of, as you say, helping this community surviving this flood this year, versus the grand level of strategic direction, do you see a potential for that gap to be bridged somehow? Can you think of what would be helpful in changing that?

Maybe it’s partly an aligning of priorities. Everything I’ve talked about so far is USAID, the U.S. government’s vision of what we want other countries to do to; it’s our own ideas. Countries have their own ideas. We’re using these metrics to measure how open a government is, or how committed they are, [but those governments] might not feel the same way, and there’s tons of other donors who have different visions.

In the broad scheme of things I think a lot of it has to come from the bottom up. Most of what I have seen and discussed is very top-down. How do we align U.S. government with other donors and everything? That’s my own personal interest, these bottom-up movements. Maybe it’s a convergence of policy people that are working on a high level supplying the needs of what people at the smaller levels of that community—smaller levels, not lower—what they’re demanding, a push and pull.

That is perhaps a different take on what country ownership could mean.

The country is made up of people. I think there’s country ownership in terms of the government showing political will. But then, like you were saying earlier, it has to be at each level that there’s ownership. If there’s not buy-in from communities, there’s not going to be ownership. I think it starts at both ends: there’s buy-in from the top, buy-in from the bottom, and those things meet in the middle probably.

Right, and maybe that’s a really great tool someone hasn’t created yet.

“People that are farmers or are going to land grant universities have a lot to say.”

Tanner in a group exercise with fellow Leland Fellows on retreat in Nairobi, Kenya, March 2018.

You have now been a Leland fellow for a year and a half. In that time, you have seen the full spectrum of development work, from project implementation on the ground to the U.S. Congress. What has your experience as a Leland fellow so far taught you about how development assistance could be improved?

I think it’s an issue of giving up power, and transfer of power to the field, in a lot of ways. I think that it could be improved by exchanges between the field and headquarters; people from our field operations coming to the U.S. and seeing why it’s so important that a certain bill passes—what does that mean, that a bill is passing? Seeing the full picture. At the same time, if you’re a Member of Congress, or if you’re someone working in an office, it’s important for you to know what it means for you to pass the bill also, or to not pass the bill. Do you see the impact of putting money towards aid by going to a rural area in sub-Saharan Africa and seeing what that is doing for a family just like yours? I think that seeing is believing in a lot of ways. There has to be an exchange and an understanding between what’s happening in Washington D.C., where we’re wearing suits, and what’s happening when you’re barefoot working in a field.

One thing I’d also like is to see more people with lived experience to be working in development. For instance, people that are farmers or are going to land grant universities, they have a lot to say. They have a big opportunity to inform policy here, and could be able to do really good work in the field, also, just through their experience working on practical farming. I think that a lot of times these conversations are not happening; [organizations] aren’t saying “Let’s try to pull people from places that aren’t Harvard, Yale, Princeton,” whatever. Pull people that want opportunities, and that have a lot to say, that maybe aren’t [being included in] these conversations. At least for me, I went to a land grant university, and have that sort of experience. I know that my classmates have a lot to say about animal agriculture, about crop science, about soil science, about all these different things that are really, really relevant. Trying to bridge gaps and get people with lived experience into positions [where] they can be helpful—I’d like to see something like that, as well.

This interview is part of a blog series with Modernizing Foreign Assistance Network (MFAN), a reform coalition of international development and foreign policy practitioners, policy advocates and experts, concerned citizens, and private sector organizations, created to build upon the bipartisan consensus that the U.S. should play a leadership role in achieving economic growth and reducing poverty and suffering around the world, and that we can play this role more effectively, efficiently, and transparently. Learn more about MFAN at modernizeaid.net.

What Happens When Nowhere is Safe?