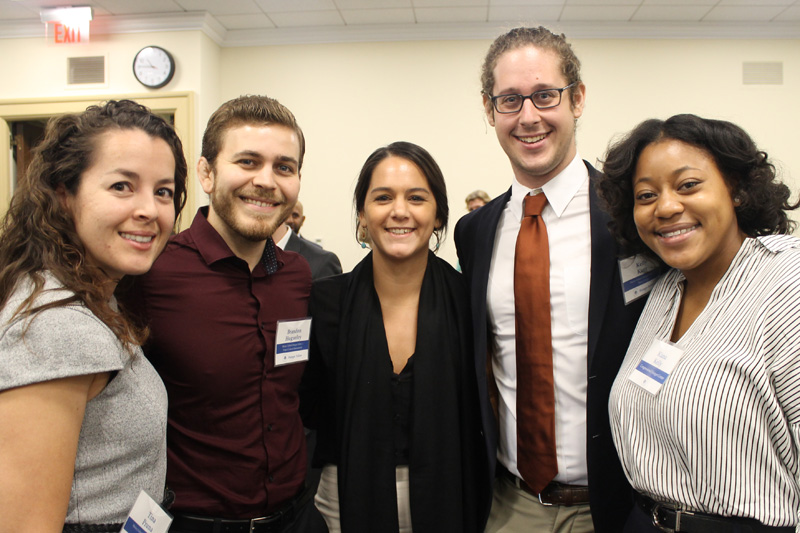 Leland Hunger Fellow Brandon Hugueley has been placed with Project Concern International (PCI), with a field placement in the Huehuetenango, Guatemala. He is currently working at PCI’s Washington, D.C. office, leading a project to map their current policy presence and to create a roadmap of potential pathways for policy engagement, as well as attending relevant working groups, policy meetings, and technical trainings throughout Washington. Read on to see what he’s learned about leadership and making foreign assistance more effective.

In the blog post that you wrote during your field year you refer to the complexity of food security, and how so many other factors are tied up in it. Now that your work is shifting scope, do you still hold that perspective?

Yeah; I think if you’re going to be doing this work, you need to understand that things are complex, and you need to be able to embrace that. You can’t just change one thing and then not expect a cascade of 100 other things to follow. I’ve definitely been living the complexity for a while, and I realize now that I have such a broader understanding of what development is, and how it works, and who the players are. When I was in Guatemala, I didn’t really understand a lot of the frustrations people had when it came to donors, with NGOs saying, “Hey, we want to do this, but we really can’t.” It all comes down to the donors, and now being in D.C., and being on that side of things, I understand that perspective a lot more.

What have you learned about the principle of country ownership from the time you’ve been placed with PCI?

[I think] it comes down to strengthening systems, and not necessarily working [only] with governments. Governments are the easy answer, but there are also places where the government really doesn’t exist, and so it’s really difficult to strengthen government institutions there. A lot of what you need to do to be making these more sustainable changes involves government interventions. But how do you make governments better governments?

I think it’s very shortsighted to be focused only on development assistance; it’s much more important to be thinking about helping countries help themselves. But a country is more than just its government; it’s more than even its people; it’s definitely more than the private sector. Even the sum of those three things, that’s not everybody. When we talk about country ownership, it makes it sound like a much simpler fix than it is. You really do need to be engaging on all these different levels—but some levels might not want to cooperate with you, or have different interests, and they’re often conflicting interests. It’s something that I’ve thought about a lot more during this fellowship because of the conversations that I’ve been a part of, [particularly] during our training weeks.

“Power isn’t inherently good or bad. It depends on how you use it, and what ends you use it for.” 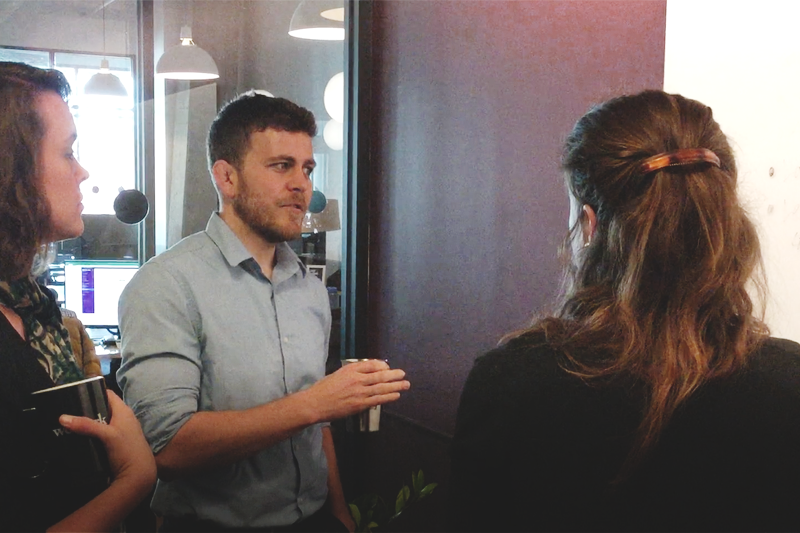 Brandon Hugueley (center) talks through a group exercise with his fellow Leland Fellows at mid-policy retreat and training in March 2019.

Now that you’re in Washington, and the scope of your work with PCI is changing, do you see other places where either country ownership or accountability are being applied?

It comes down to the  donors more than anything. Even if we have an innovate approach to help countries take ownership in a new, meaningful, and sustainable way, if no-one’s going to fund it, it doesn’t matter. Most of the people here [at PCI] that I’ve had the chance to work with have really great thoughts and ideas, but we’re so constrained. And that constraint’s never going to go away.

I think there really is a push to help countries be more self-reliant and sustainable, though. Even from a selfish economic perspective, for the United States it makes sense to do things better, so that we don’t have to keep giving money. There are real efforts being made, and a couple things that are interesting on that front. I’ve heard a lot about domestic resource mobilization, helping countries generate revenue.

I went to a talk at Oxfam a couple weeks ago on tax evasion and tax havens and equality. If we look at how much money the development community spends to help these countries, it’s still nothing compared to how much money there already is in a lot of these countries. But it’s being hidden away, and governments can’t access this funding to improve the lives of their citizens, or to develop social safety nets. It’s kind of this vicious cycle: the government doesn’t have the funds to invest in education, or healthcare, or any of these things, and then citizens don’t trust the government, and they don’t want to pay taxes to the government because they don’t see the benefit in doing that, so people find a way to hide it. The problem’s not really with the people living in poverty, or even the middle-class—the problem is with the wealthiest 1% who are finding ways to, illegally or legally, keep the government’s hands off their money.

I think that’s where there’s actually more potential. That’s a little bit different than the foreign aid and development, but the goal is the same. You want to help these countries develop, and I see now development work as just one tool that can be used towards that end. It’s more appropriate in some context than others, but there are other ways to help support the development of countries that don’t involve traditional development programs or anything like that.

A lot of it’s just addressing inequality and stopping the rich from hiding all their money. You can help countries generate tax revenue and ensure that the tax revenue is going to the right places, so it’s going towards education, or the healthcare system. I think that would have a much bigger effect than whatever amount of money the United States is going to throw at these problems, or whatever programs that PCI or any other NGO does. It’s a very nebulous problem, but I don’t think that means that we can afford to shy away from it, at least if we want to have an impact.

It does raise the question of who has standing to evaluate that situation—for instance, how would Americans react if economists from Guatemala were to study the United States and tell us that our tax money was not being distributed in an equitable way?

That’s tricky, too. There’s a lot of conversation about how development work can be less paternalistic, and that’s a great thing. But I think at its core, all development work is going to be somewhat paternalistic. I come from a public health background, and all public health is paternalistic. It’s saying: “Science says this is good; this is bad; vaccinate your children,” or whatever. This restricts people’s liberties, to some extent, for what we define as the greater good. If you’re talking about government interventions to help strengthen civil society or government institutions, we’re still deciding what part of civil society to invest in. At the end of the day, I really don’t think there is any way you can completely avoid paternalism, and I don’t think that paternalism is always 100% bad. It has been misused in the past, and it can be misused in the present, and I’m sure it will be misused in the future, because it’s power, it’s just a tool. Power isn’t inherently good or bad. It depends on how you use it, and what ends you use it for. I think as a goal we’re focusing on trying to make that power distribution as equitable as it can be. But it’s never going to be purely equitable, because we’re already the country with all the money and the power, and we have the money and the power largely because we’ve extracted it from other countries, or because we went through industrialization first and we didn’t have to worry about carbon emissions and pollution.

If, as you say, this power imbalance is an unavoidable circumstance of our history and current geopolitical reality, do you have ideas for concrete things that could shift things going forward?

In terms of a grand idea that will never happen: similar to how we have in the United States a tax system that collects money from everybody and then redistributes it, I think we need the same thing on a global level. Ideally, we collect taxes to redistribute wealth from those who have too much to those who don’t have enough, at least a little bit. Right now this happens on a voluntary basis, through how much we fund foreign aid [in a given] year. But what would the United States be like if taxes were voluntary, and it was up to the rich to donate money to help poor people? I don’t think that would be a very good model, but that’s the model that we use to help the world, on things that are even more complex; relying on philanthropy, or just the generosity of governments.

“The self-awareness of when to lead, when to get in front, and when to sit in back….” 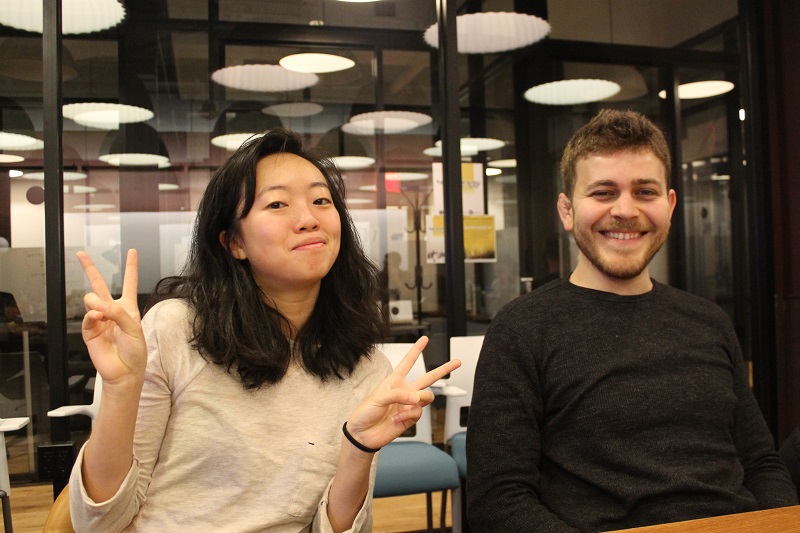 Hunger Fellows Faye Duan and Brandon Hugueley share a moment of levity at mid-policy retreat and training in March 2019.

That segues right into leadership. Has your perspective on leadership changed since you started the fellowship?

I think there are a lot of different types of leaders, and types of leadership, and some are more appropriate in certain contexts. Sometimes you need someone who can lead from the front, and be very outward facing, and at the same time you need people who can lead from behind, or from behind the scenes. I don’t think leadership is one thing. It’s very context dependent, and people who wouldn’t typically be seen as leaders, put in the right context, can be leaders even without trying.

Often times we have being a leader as a goal, and we can get so caught up in trying to be a leader that we don’t reflect on whether or not we’re the right person to lead in [a given] context. There’s all these incentives—there are social incentives, there are financial incentives, you can have a high-ranking position. I love all those things, but it doesn’t mean that what’s good for me is going to be good for everybody else, or that I would be the best person to do this job, just because I can obtain a position of power. So I’m thinking about how important it is for me to just be aware and realize that sometimes I shouldn’t be the one who’s leading. Having the self-awareness of when to lead, when to get in front, and when to sit in back—I do think this fits in well with the whole idea of the United States or other wealthy countries not being the ones who are necessarily driving development, but rather allowing countries to have autonomy and have ownership over their own development.

This interview is part of a blog series with Modernizing Foreign Assistance Network(MFAN), a reform coalition of international development and foreign policy practitioners, policy advocates and experts, concerned citizens, and private sector organizations, created to build upon the bipartisan consensus that the U.S. should play a leadership role in achieving economic growth and reducing poverty and suffering around the world, and that we can play this role more effectively, efficiently, and transparently. Learn more about MFAN at modernizeaid.net.