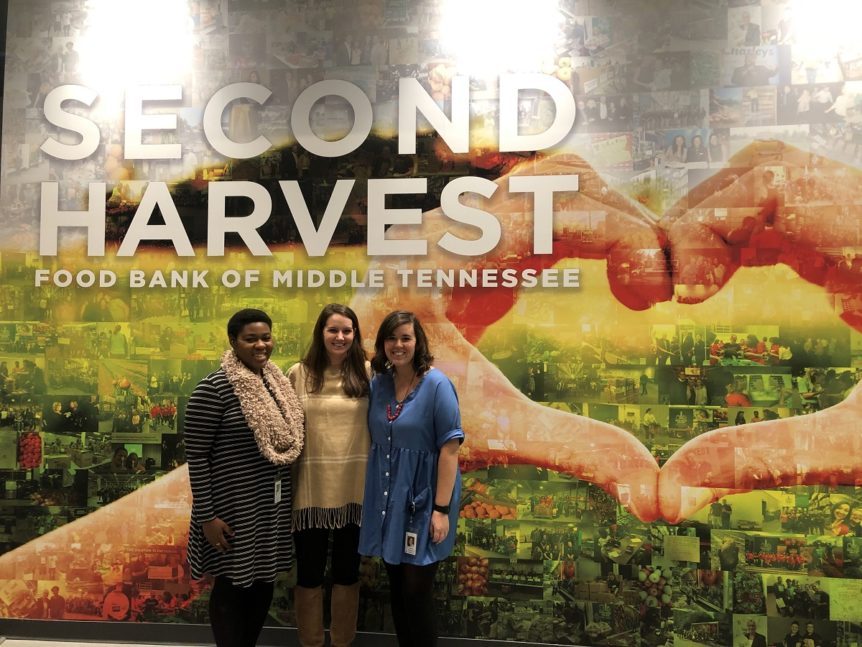 26th Class Emerson Fellows Margaux Johnson-Green and Emma Williamson are placed with Second Harvest Food Bank of Middle Tennessee in Nashville, Tennessee for the field placement portion of their fellowships. 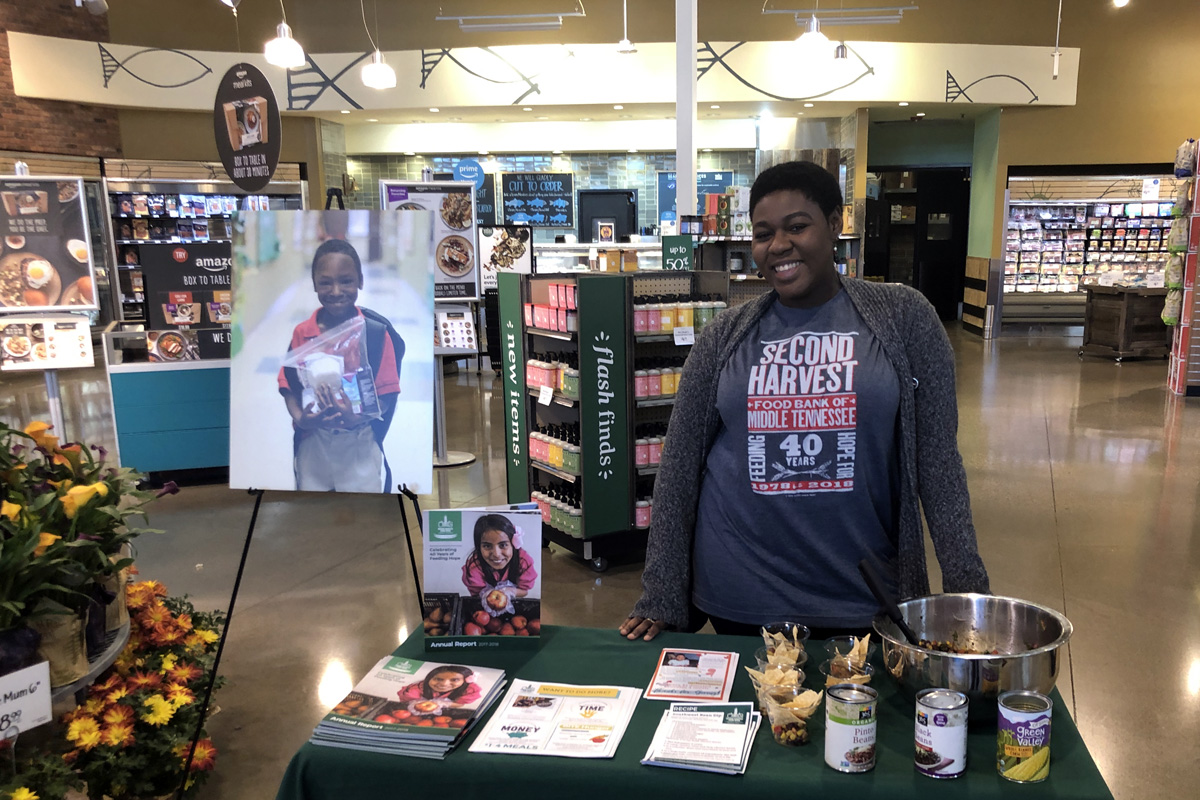 Margaux shares information about Second Harvest at a grocery store

Despite growing up only four hours southeast of Nashville, Tennessee, prior to receiving my field placement, I had never visited the city. My working knowledge of Nashville was based on what I had seen on TV—meaning that I imagined the city to be filled with the glitz, big hair, and cowboy hats traditionally associated with country music. While the well-known Broadway Street downtown embodies my vision of the classic Music City, Nashville has undergone a rapid growth in development. Only in the last three years has Nashville seen its population growth dip below 100 people per day1, making the dozens of construction cranes in the skyline just as synonymous with the city as acoustic guitars are.

Like in many other metropolitan cities around the country, development begets gentrification, and Nashville’s deep history of racial housing segregation has exacerbated the displacement process of low income and minority communities. Urban areas that once were rated as “hazardous” by the government under redlining now have the highest density of demolition permits—and greatest decline of Black population. In the 37208 ZIP code in North Nashville, home to the historically Black Jefferson street, 254 demolition permits were acquired between 2014 and 2017. However, between 2010 and 2017, North Nashville’s Black population decreased by 1,800, while the suburb of Antioch saw an increase of 4,7002. As these families are priced out of the city center by new high-rise apartment buildings and are moving toward the outskirts of Davidson County in response, they are also being faced with moving away from the social services that are headquartered near the heart of the city such as my field placement at the Second Harvest Food Bank of Middle Tennessee.

This widespread demographic change has caused Second Harvest to shift its focus to reassessing where the need lies, and how to position themselves to best meet this need. Therefore, my field site partner, Emma, and I have come into the organization at an exciting turning point as the second part of the food bank’s mission, to “work to solve hunger issues” is becoming equally as important as feeding those that experience hunger.

As such, I have had the opportunity to work on centering participant perspectives through both equity-building and the evaluation of Second Harvest’s senior feeding programs. My main project is focused on the Commodity Supplemental Food Program (CSFP), a monthly food box program for people aged 60 or older in Davidson County whose incomes fall at or below 130% of the federal poverty level. Over the last two months I have been working internally with my team members and externally through conversations with other food banks to develop a survey for participants of CSFP to hear firsthand how the program is running in terms of accessibility and use. With this data, I will be able to make recommendations to improve the administration and structure of the program that are based directly on the challenges and advantages of the program that the participants have self-identified.

In conjunction with the evaluation, I have also done direct outreach with CSFP and the Supplemental Nutrition Assistance Program (SNAP) to increase knowledge and enrollment throughout the county with seniors, which has greatly informed all aspects of my work. Presentations that I have given have turned into impromptu focus groups, ordinary inquiries transform into safe spaces for venting, and tabling events double as informal networking. Through hearing everyday participant experiences in their own voice, I have learned that while data can be a powerful agent for storytelling, the most impactful part of my work is seeing how the programs manifest themselves as an investment in the well-being of people, or at times, how they fail to. All too commonly, after gleefully receiving cheese provided by CSFP, participants dejectedly tell me that they receive “a whole $16 per month” in SNAP funds, underscoring both the need for large-scale policy change and patient-centered programming to generate innovative solutions to fill the gaps that exist in the meantime.

While my experience in Nashville has not yet given me all the answers to the multitude of questions that I had coming into the fellowship about solving hunger, it has excelled in allowing me the opportunity to hear diverse perspectives on the policies that I will be working with in my policy placement in March. With this, I can look back at the past two and a half months with pride knowing that I have made connections and had conversations that will exceed long past the fellowship. Humbled by my time so far, I can only hope that I can leave Nashville with as much as it has given me. 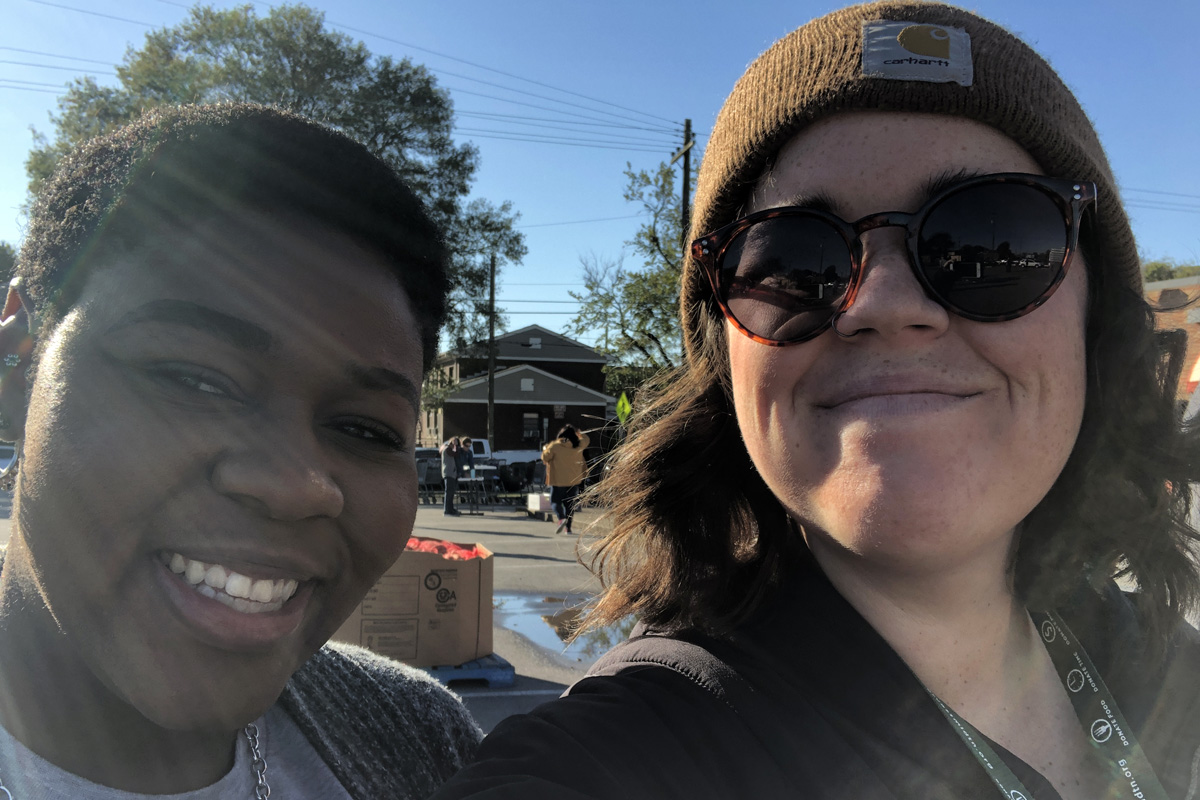 Margaux and Emma on a sunny day in Nashville

Johnny Cash may have said it best when he sang the words, “Proud as we can be to live in Tennessee”. Tennessee is a state with rich pride—and rightfully so. The beautiful plains of the West seamlessly blend into rolling hills, showcasing the Smokies in the East. The state itself is broken up into three distinct regions, totaling 95 counties, all with unique communities, industries, and inhabitants. Nashville, the most populous city in Middle Tennessee, boasts the world’s largest country music scene. Memphis, in West Tennessee, is rich with a history of activism, barbeque, and the blues. And in East Tennessee, Knoxville is nestled in the mountains, positioned near both National Parks and eastern states. Just the sheer variance in geography and regional identity within the state can already provide a lot of insight. It is not one uniform identity, set of people, or beliefs. Like many other parts of our country whose stories often get lumped together, the life of a Tennessean is not a single narrative.

But there is a common experience: In Tennessee, 934,310 people are struggling with hunger, which is about 1 in every 6 people. And even more common, 2,120,365 people are living below 185% of the poverty line. Meaning, while many Tennesseans are not technically in poverty, they are likely one major accident or emergency away from being there.

My field site partner Margaux and I have been working at Second Harvest Food Bank of Middle Tennessee. Second Harvest is the largest of several food banks in Tennessee. It services 46 of the 95 counties in Tennessee, with a wide range of services including child nutrition programs, SNAP outreach, senior food boxes, and mobile pantry distributions.

During my time at Second Harvest, I’ve been working closely to grow capacity with rural partners through utilizing federal nutrition programs such as the Supplemental Nutrition Assistance Program (SNAP) and The Emergency Food Assistance Program (TEFAP). I’ve also been working in three rural counties to connect agencies with non-traditional partnerships and food access points. The greatest joy of this work has been exploring small-town America while getting the chance to understand the experience of life in these towns directly from local people. Though stories range from town to town, I often hear a narrative that embodies both the ongoing strength and resilience of small communities while honestly speaking to the unique constraints of a rural area, such as outdated infrastructure, shuttering healthcare systems, and an overall loss of well-paying jobs.

I was drawn to becoming an Emerson National Hunger Fellow because I wanted to continue working in the anti-hunger field while gaining more exposure to how that work can greatly differ across the United States. Though my time here has been short, I’ve grown as a leader in ways I couldn’t have foreseen without the experience. I’ve learned an enormous amount about the interplay between listening, learning, and trust when working with complex issues and communities.

Though there has been a lot I’ve learned, there is also a lot I would like to accomplish by the time I leave Nashville. By February, I will have worked to develop unique strategies for rural capacity building with the voices of lived experience at the front. I will have worked alongside local agencies to implement programs like SNAP and TEFAP helping to increase food access and autonomy for food-insecure Tennesseans. And, I will have insights and suggestions on best practices for utilizing federal programs, nutrition guidelines for partner agencies, and a roadmap for developing non-traditional partnerships.

And through all this, when I arrive in D.C. in February, I’ll be carrying the stories, innovations, and struggles of the communities I’ve gotten the chance to partner with into my policy work. I’ll be thinking of how solutions on a national scale can impact rural Tennesseans, like many of the folks I’ve gotten the privilege to meet. I’ll think of people like Pam, who works in Macon County serving food and providing wrap-around services over 200 families a month. Or like the many small churches in West Tennessee who partner with Second Harvest to set up mobile food distributions in areas that don’t have daily services. There is no one-size-fits-all for solving complex issues like hunger and poverty. But I believe through strengthening county-level hunger work and elevating the voices of people living in poverty, these solutions and innovations will pair more effectively with federal and state legislation to ultimately help end hunger. 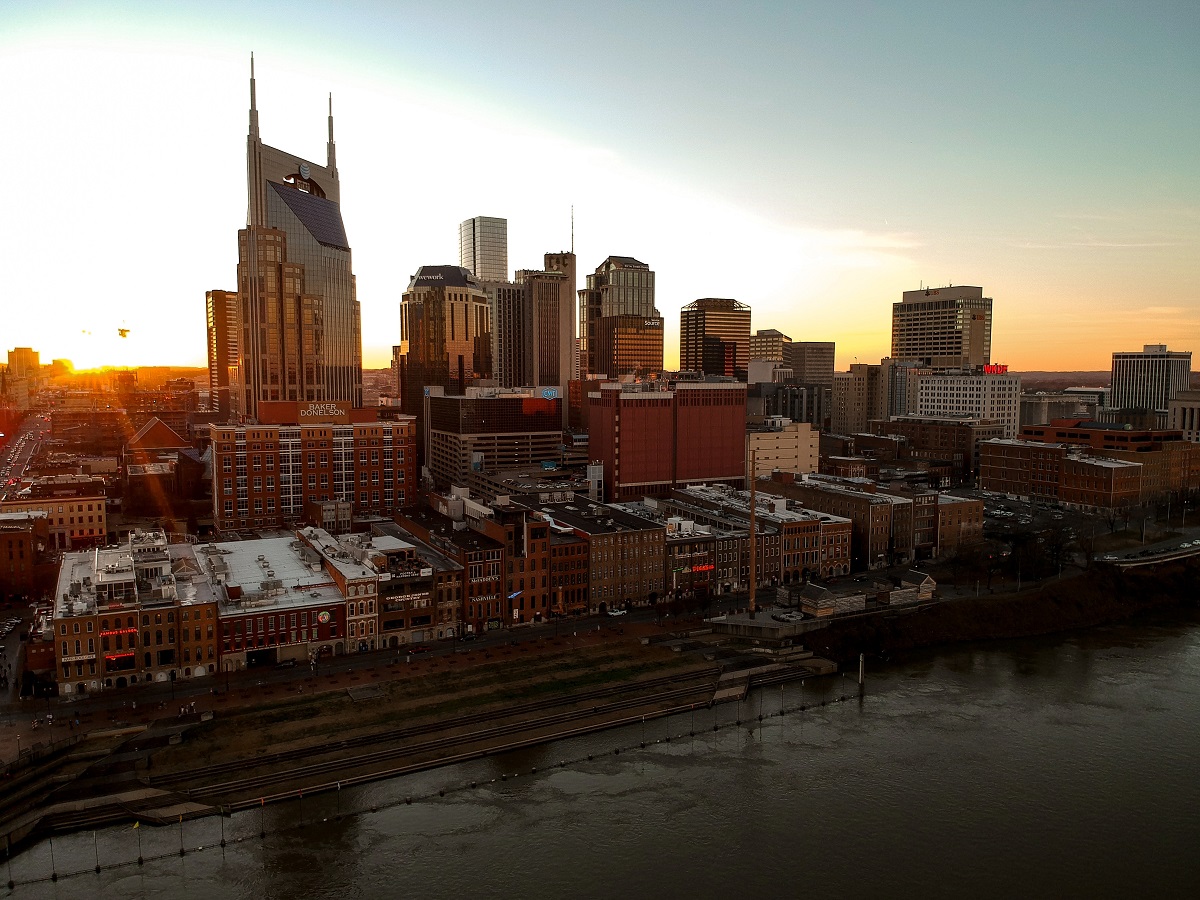