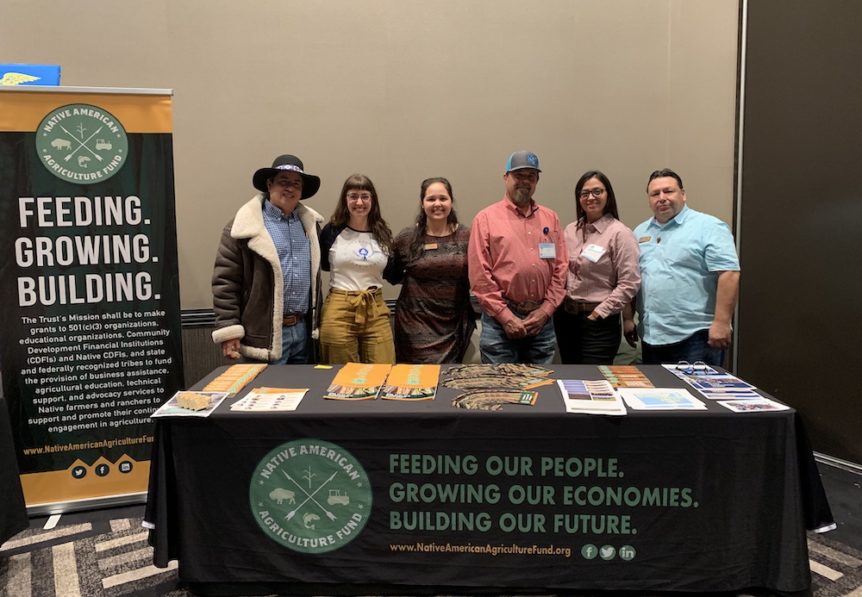 Above: Anne Marie Noll (second from left) poses with colleagues from the Native American Agriculture Fund at an IAC conference in Las Vegas, December, 2019.

After growing up in the Hill Country of Texas, the Ozark foothills of Northwest Arkansas felt strangely familiar as I drove in on Interstate 49 in early September. I was living in Boston, Massachusetts, at the time when I found out that I was moving to Arkansas for my Emerson field placement. I must admit I did not know how to feel about moving back to the region after leaving Texas and living across the USA, Latin America, and Europe the past six years.

While I was living in Boston, Joy Harjo (Mvskoke) was named the first Native American United States Poet Laureate. I immediately went and checked out a collection of poems called “Conflict Resolution for Holy Beings” from Boston Public Library in Copley Square. One poem, “For Calling the Spirit Back from Wandering the Earth in Its Human Feet,” helped to motivated me as a FoodCorps AmeriCorps service member last year to think through dismantling systems of oppression, personal healing, and community healing through food justice work. After moving to Arkansas, in late September, my supervisor Karli Moore (Lumbee), my field site partner, Emily Hwang, and I drove the hour and a half from Fayetteville, Arkansas, to Tahlequah, Oklahoma, to see Harjo speak. I found myself silently crying as the last poem she read was the same one I had carried with me from Boston to my desk in Fayetteville at the Native American Agriculture Fund (NAAF). This poem had come to symbolize my conviction and commitment to working on the interconnectedness between food, the environment, and human rights. This conviction was the reason I applied to the Emerson Fellowship as it understands hunger as a symptom of interconnected issues such as poverty and racism and believes in a multi-faceted approach to end hunger in the USA.

My placement at NAAF in Fayetteville, Arkansas, opened my eyes to the long history and vibrant presence of Native agriculture today in the United States. In 1999, the Keepseagle v. Vilsack class-action suit was filed alleging that the United States Department of Agriculture (USDA) had engaged in discrimination against Native American farmers and ranchers in loan programs and servicing of loans. In 2018, NAAF was created by the court as a vehicle to distribute the remaining settlement funds within a period of 20 years by providing grants to eligible entities for business assistance, agricultural education, technical support, and advocacy services to support Native farmers and ranchers. Grants are distributed through 501(c)3 organizations, educational organizations, Community Development Financial Institutions (CDFIs) and Tribal Governments. From the beginning of my time at NAAF, one phrase that the CEO Janie Simms Hipp (Chickasaw) said over and over stuck with me: “The answers are already in Indian Country.” Since time immemorial, Tribes managed lands, cultivated, participated in complex trade routes, and lived sustainably with the land creating vibrant and sustainable food systems. With the arrival of Europeans in North America, active dismantling, genocide, and oppression have disrupted the food systems that had sustained Tribal communities. In response to past and current consequences of colonial and then Federal systems, Tribal communities have initiated projects revitalizing agricultural practices by promoting Native food sovereignty.

For too long Indian Country has been looked at from a deficit perspective, instead of a strength-based approach. The two concepts of strength-based community work and Indigenous food sovereignty became the two principles that guided my main assignment for NAAF. NAAF’s focus on Native farmers, ranchers, and food people (including fishers, hunters and gatherers, gardeners, etc.) led my work as a fellow to look into economically viable and sustainable options for markets for Native producers in their own communities, while at the same time increasing food access. I focused on agricultural markets located in Tribal administration buildings (or buildings nearby) to help encourage food sovereignty where there is already Tribal sovereignty. The work, conducted through in-person visits and phone interviews with experts in the Native agricultural field, provides the basic leg work to get Tribes and other interested parties started on a path to supporting Native food producers in Indian Country while increasing food access in. I was able to share this information gathered through presentations at places such as the Intertribal Agriculture Council Conference in Las Vegas in December and at a subcommittee on Food Sovereignty at the Affiliated Tribes of Northwest Indians in Portland, Oregon, this January.

At the end of the day Indian Country needs allies, but allies need to show up. They need to educate themselves, humbly admit when they don’t know the answers, ask questions, and most of all listen. Indigenous voices need to not just be included in work but leading the work the organizations and governments are doing. Tribal governments have the inherent right to determine their own futures as sovereign nations. In 2007, Indigenous nations from all over the world crafted the Declaration on the Rights of Indigenous Peoples to hold governments accountable in the acknowledgement and protection of these inherent rights (although the U.S. government has yet to adopt this declaration). Food Sovereignty work is one of the most important fields encouraging Native folks to strengthen their own Native communities. As Zach Ducheneaux (Cheyenne River Sioux Tribe), executive director of the Intertribal Agriculture Council, reminds folks, “Food Sovereignty is Tribal Sovereignty.”