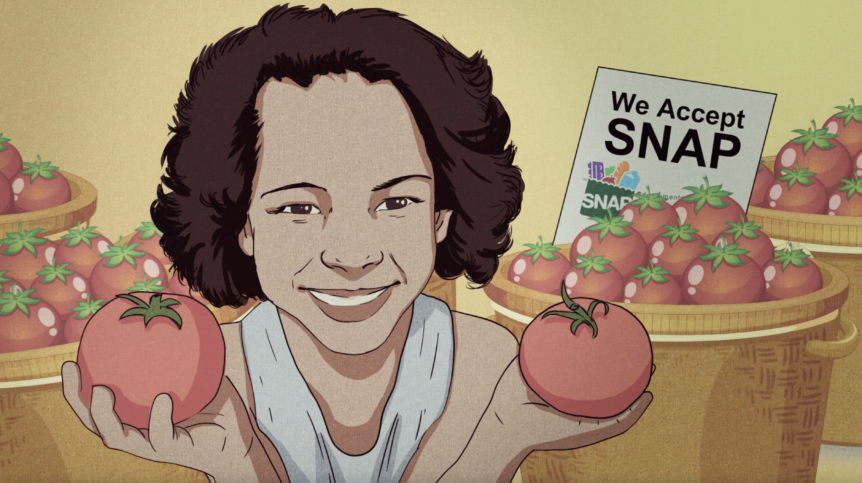 Just in time for the holiday season, the Hunger Center has launched a new video and discussion guide to help individuals learn about the problem of hunger and how they can get involved in solving it. Coming at a time of year when many Americans are inclined to donate or volunteer their time to address hunger, this new resource shows how educating and advocating with policymakers is key to ending U.S. food insecurity.

Food Insecurity in the U.S.: Problems, Programs, and Policy is a 10-minute video covering the basics of food insecurity in the U.S.—the scope of the problem, its root causes, and federal policies that combat hunger. The video can be viewed in its entirety or as a series of four short segments. The video also features first-person stories from people who have been personally affected by hunger and poverty and have used their experience to become advocates. The video and its accompanying discussion guide are part of Zero Hunger Academy, the Hunger Center’s online education hub, and were developed with support from Albertsons Companies Foundation.

“Volunteering at food banks and running canned food drives are important ways of taking action against hunger,” said Shannon Maynard, Executive Director of the Congressional Hunger Center. “However, if we want to end U.S. food insecurity, they can’t be the only actions people take. Being an advocate starts by understanding the problem of hunger and the role that public policy plays in solving it. Our new resource is perfect for student organizations, faith groups, volunteer coordinators, and others, to show how anyone can do their part to build the public and political will to end hunger.”

“Far too many people in America don’t know where their next meal will come from,” said Christy Duncan Anderson, Albertsons Companies Foundation President and Executive Director. “And far too many people don’t realize that their voice is one of the most powerful tools we have for supporting effective anti-hunger programs and policies. We’re proud that support from our Nourishing Neighbors campaign is allowing the Hunger Center’s advocacy resources to reach new audiences and grow the movement that may end food insecurity in our lifetime.”

To access the video and discussion guide or other freely available online learning resources, visit ZeroHungerAcademy.org.