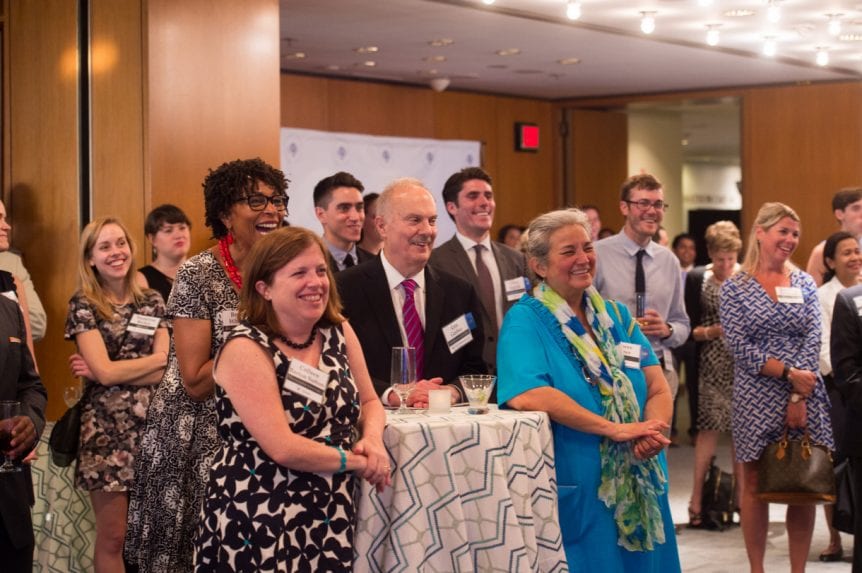 The Congressional Hunger Center had the honor of recognizing four distinguished leaders in the fight against global and domestic hunger at the 11th Annual Hunger Leadership Awards on June 13, 2017 at the Madison Building of the Library of Congress in Washington, D.C. Attendees from the government, philanthropy, business, and non-profit sectors, as well as current Fellows and alumni from the Emerson and Leland Hunger Fellowship programs, were on hand to recognize the achievements of our Congressional and alumni awardees. 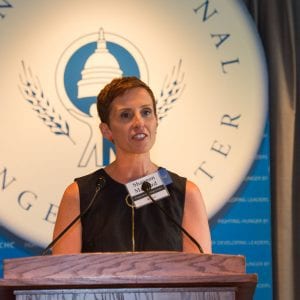 The theme of this year’s awards ceremony was Building Bridges to a Hunger-Free World. Executive Director Shannon Maynard’s opening remarks recalled the fruitful bipartisan collaboration between Rep. Bill Emerson and Rep. Mickey Leland, the namesakes of our Fellowship programs. “Today, more than ever, we need bridge builders, like tonight’s honorees,” said Maynard; “leaders who are capable of challenging the status quo empathetically, setting aside differences where there’s progress to be made and casting a vision of what a huger free world can look like.”

In their remarks both Members of Congress highlighted the importance of working across the aisle to tackle the challenges of domestic and global hunger.

Despite the extraordinary work of our awardees, there is still much to be done. Across the world, famine has been declared in South Sudan and threatens to break out in Ethiopia, Nigeria, and Yemen. In the United States, the President’s budget request reduces or eliminates funding for SNAP and many other programs (including the Emerson and Leland Hunger Fellowships) that are working to break the cycle of poverty and alleviate hunger domestically.

Now is the time to follow the example of our honorees, bridging our differences and dedicating ourselves to the common goal of eradicating hunger. As Board Chair Rep. James P. McGovern said in his remarks, invoking Senator George McGovern: “You don’t have to agree on everything to agree on something, and [for] the something we agree on, we ought to come together and move.”

If you agree with us—that food insecurity is a problem we can and must solve—you can join the Congressional Hunger Center on its mission to end hunger by 2030. There are many ways to get involved. Here are just a few:

Our sincere thanks to the following sponsors for their generous support of the 2017 Hunger Leadership Awards:

Friend of the Center

Proceeds from the Awards Ceremony provide critical support for our flagship Emerson and Leland Fellowship programs, which train and mentor leaders through hands-on work both in community-based and in policy-focused organizations throughout the U.S., Africa, Asia, and Latin America.