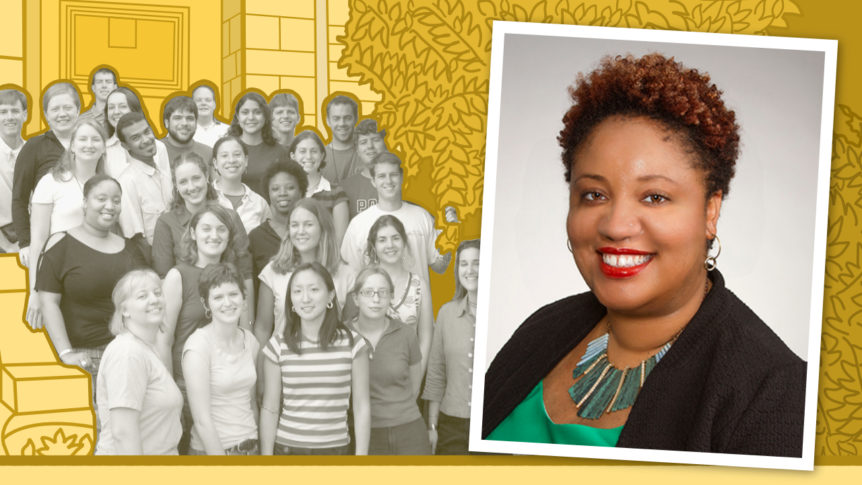 Continuing our series of profiles of Hunger Fellow alums, let’s catch up with Alexandra Cawthorne Gaines (pictured, above, with her fellow fellows in front of the William Penn House in Washington, D.C.). During her time as a fellow, Alexandra (Emerson ’05) was placed with the National Policy and Advocacy Council on Homelessness in New Orleans, Louisiana, and with the Poverty & Race Research Action Council in Washington, D.C.; she now works for the Center for American Progress.

“On a professional and even on a personal level I am driven by injustice,” says Alexandra. “As someone who witnessed family members’ economic hardship at a young age, I learned how economic struggle affects your ability to be a good parent, or friend, or daughter, or sister.”

This passion for combating injustice developed further through Alexandra’s participation in the Bill Emerson National Hunger Fellowship and continues to inform her work as the Vice President of the Poverty to Prosperity Program at the Center for American Progress (CAP). Alexandra manages a team of researchers and advocates focusing on basic needs policy, an umbrella term which encapsulates nutrition, affordable housing, child and youth poverty, and a strong safety net writ large. Last year Alexandra’s team joined a coalition of organizations to highlight SNAP’s role in reducing hunger in the U.S. Through research, social media campaigns, and public comments, the coalition was successful in preventing administrative changes which would weaken the program, and their joint advocacy led to the expansion of SNAP in the first COVID relief package. Additionally, this collaborative effort has sparked continued discussion about SNAP expansion ahead of the next relief bill. This year CAP is prioritizing policy initiatives that ensure a fair and equitable recovery from the pandemic, especially for low-income people.

Alexandra strives to center lived experience in her work through initiatives such as Talk Poverty, a CAP-sponsored journalistic platform where writers are paid to share their lived experiences with a policy lens. Talk Poverty helps CAP, and Alexandra’s team, to align their recommendations for state and federal policy makers with communities’ real needs. She describes Talk Poverty as a check on her team’s work stating, “What’s interesting about it is that sometimes what we produce through Talk Poverty feels like it may be in conflict with some of our policy recommendations,” she says, “but it’s important to understand these potential tensions. It helps us to see where we may not be hitting the mark with our policy recommendations, especially when it comes to what a person is actually experiencing living in or near poverty.”

Her commitment to centering lived experience was informed by her experience as a fellow. “The field placement opened my eyes to the concept of qualitative research,” she says, “and that fact that you could actually develop products that could inform policy where you were representing the voices of people with lived experience.”

At the start of her Emerson Fellowship, Alexandra saw a future for herself in direct service and was particularly eager for her field placement. “No matter what community I ended up in, I thought that the initial field experience would create a tangible path forward for a future in direct support.” Ultimately, it was her policy placement that, much to her surprise, helped her to find her space in the field of anti-poverty work. “Being at PRRAC opened my mind and my eyes to what was possible beyond front-line work. Ultimately what I got out of it [the fellowship] was this realization that my skill set, my interests, and my passion was more activated by policy work.”

The community provided by the fellowship also played a large role in Alexandra’s success, both as a fellow and as a career professional. She urges all current and future fellows to take advantage of the community of like-minded individuals, and to build long-lasting connections both within their class and with alums. “The mentorship aspect, and the focus that the Hunger Center has on that, is so incredibly important and should continue to be cultivated. The Hunger Fellows both in the program now and those interested should take advantage of all of the opportunities to network—even if they don’t like it. Had I not taken advantage of that network, I would say, I would not have the career that I have now.” The network helped her to grow her career and find her space within anti-hunger work: now she is working to do the same for the next generation through opportunities such as a career connects program at her undergraduate institution.

Alexandra’s deep commitment to economic justice and firm belief in uplifting lived experience shapes her vision of a hunger- and poverty-free world. Since completing her fellowship, she has continued to work towards this vision and now as Vice President of the Poverty to Prosperity Program Alexandra manages a team on individuals working to do the same.